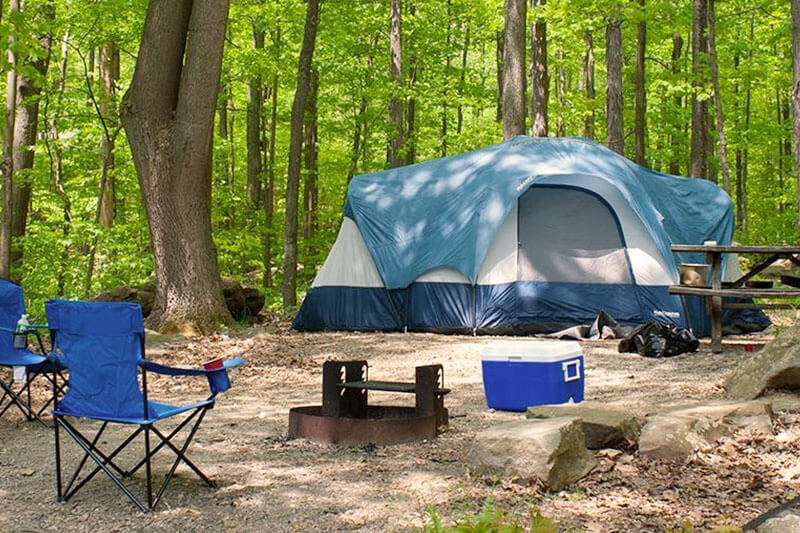 When it comes to camping in the great outdoors, people are often firmly divided into two, err…, camps. The first camp being the one that has set up early on the campsite, to make the most of the day ahead. The people at this camp love being in the company of Nature.

They don’t mind the odd twig or two stuck in their hair and they will eat food that’s fallen on the ground – After all, that’s where all our food comes from! They also tend to be well-organized and have an uncanny ability to tell you the time of day without the use of a clock (the times of day being split into three segments: breakfast, lunch, and dinner time – anything in between is time lost to the world).

The second camp can be identified by a poorly set-up tent (look for the collapsed peak at the center) whose inhabitants emerge like endangered fauna from the dark recesses of their polyester cave, no earlier than midday. If there’s a power supply nearby, they will probably have plugged in several appliances, just to hear that familiar buzz, and to help them feel closer to their ancestral home/apartment block. Warning: if you try to take away their appliances, they will rear violently and strike with great force.

Is there really no “middle ground” in a camping ground? Why are the stereotypes of the city-slicker versus the tree-hugging nature lover so firmly entrenched in our minds? And why do some people who have never been camping automatically assume that it’s “not for them”? It may have a lot to do with the fact that camping is seen to be an activity for outdoor purists and fitness fanatics alone. That, in order to survive a day camping, you will need to be able to carry the equivalent of your body weight in canned goods and tent equipment. It is also helpful to know the fine art of spear-fishing.

I confess to having been a former member of the second camp. Until a few weeks ago, I’d never set foot inside a tent, and the thought of going for several days without my blow-dryer and hair straightener made me want to bury my head in the sand (well, not really – because then I would have to wash my hair and I wouldn’t have a blow dryer and hair straightener to make it all nice and shiny again).

The Boy, on the other hand, is a seasoned camper, so when the opportunity to go camping as a couple arose, I trusted his instincts (that I would love the experience) and said yes to a weekend in a tent, with no shower facilities.

We arrived at the riverside camping ground in a stunning part of the Southern Highlands, with the bare necessities: the tent, our sleeping mats, sleeping bags, and food – glorious food! (more on that later). The river was clean, calm, and invigorating. It appeared endless. The next day, it took us on a journey: from our camping site, we kayaked down its tranquil length, stopping for lunch by the riverbank. The Boy showed off by swinging from a rope and handle tied to a beautiful old tree. Very graciously (or, ungraciously, as the case may be), the river broke his fall.

On our first night, the Chef (same person as the Boy) cooked up some chorizo and gourmet couscous on a little gas cylinder. Did you know they make stoves especially for camping? It means you don’t have to know how to start a fire with your bare hands! The chorizo was dee-licious. I went for seconds, then thirds (camping will do that to ya, you know). What a great excuse to help yourself to more: I went kayaking – I earned this. Back off. The last chorizo is mine.

As for the non-existent shower facilities, there was a clean, fully-functioning toilet block on-site and plenty of outdoor taps for dishwashing and water bottle refills. If you absolutely cannot do without a shower for one day, hooking up a pop-up shower tent to an outdoor tap is easily done. Or take a swim in the river!

Assembling a tent is a no-brainer (don’t worry, people from the second camp, your tent won’t actually collapse on you). You’ll find that almost all tents produced nowadays are designed for easy set-up. And with the use of cutting-edge technology and material in modern tent manufacture, it will be difficult to find a tent that won’t do a great job of keeping you sheltered from the wind, sun, and rain.

I returned from the camping trip a converted woman. Not being particularly athletic, I was surprised at how quickly I took to kayaking. It’s a water sport that can be leisurely or intensive – you set the pace. The activity is enjoyable in itself but I think what I liked about it best was that it took me on a journey that ended with a renewed sense of what I was capable of – paddling upstream, against limitations I thought I had.

The Boy thought I did a good job too. We celebrated with a great meal at a local restaurant before the long drive home.

Hammock Facts You May not Know About