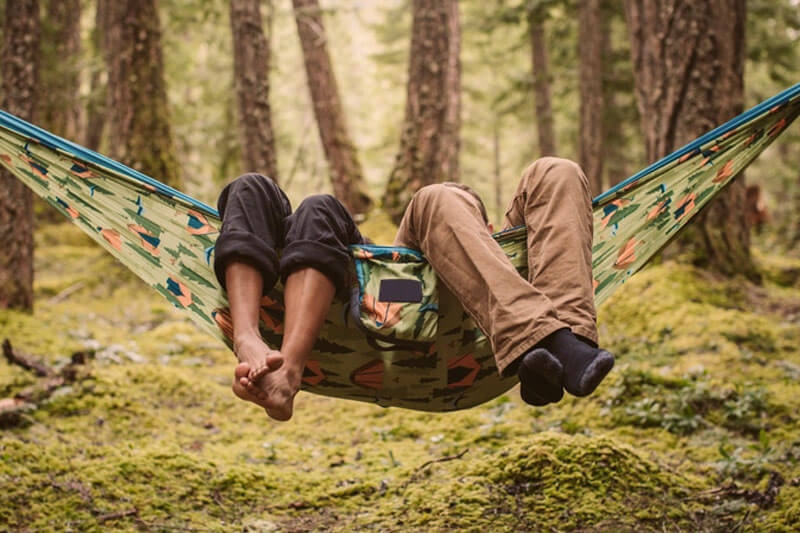 There is no mysterious answer to the question ‘what is a hammock‘. In fact, it isn’t easy to find someone who doesn’t already know what a hammock is, as well as where it is commonly used. But there is more to a hammock that simply being a fish-net type bed that hangs between two coconut trees. In this article, you will find something you never knew about the hammock we use so often.

1. Where Did Hammocks Originate?

The first references to hammocks were made by the Spanish colonists that had settled in the West Indies. It was noted that the native tribes seemed quite happy to sleep off the ground, in beds that resembled fishing nets more than beds. The Europeans were far from infatuated with the item, but the advantages were hard to ignore, particularly as the conquistadors continued their campaign around the Caribbean and the Americas. After all, they were light, easy to carry, and straightforward to use in the region’s thick jungles.

2. Where Did the Word Come From?

The word ‘hammock’ actually comes from the Taino word ‘hamaka’, which is rather unimaginative in its translation as it simply means ‘fishnet’. Tiano, incidentally, is the people that inhabited the Caribbean region, especially the island of Hispaniola, which is made up today of Haiti and the Dominican Republic.

A loose link has been made with ancient Greece, but there isn’t actually any definite evidence that a hammock (of a hammock-like item) was ever used around the Mediterranean. The only reference refers to the Athenian politician Alcibiades, who lived in about 400 BC, who reportedly ‘had his galley bed hung from ropes’. But since no further description exists, what exactly that means is left to interpretation.

4. Who Did Bring the Hammock to Europe?

Well, this is a rather simple guess too… Christopher Columbus. He landed in the Bahamas in 1492, where he was greeted rather warmly by the local Tiano tribe. When he returned to Europe in glory a year later, he brought some of the natives with him to present to the Spanish court, and with them, he brought hammocks.

5. I Thought Hammocks Were a Naval Invention?

Nah, they just made use of them! Surprisingly, despite the clear advantages of space, comfort, and affordability, it took 100 years for navies to supply hammocks to their crew. It wasn’t until 1597 that the Royal Navy introduced canvas hammocks on their warships, and even then only guns desk where there was no room for bunk. The delay is somewhat curious since hammocks envelop the sailor and swings in motion with the ship. Therefore, it was much safer than the traditional bunk, from which sailors had been known to fall during rough seas, suffering serious injury and even death.

6. What is a Hammock For… the Good Life?

While it is tempting to believe a hammock was created to embrace the laid back lifestyle, they were actually invented for more practical reasons. The jungle floor has plenty of dangers, from insects to snakes to carnivorous animals. Taking to the trees wasn’t really a solution since tree-bound insects and ants were also a danger. By sleeping in a bed suspended above the floor, the occupants could be more certain of a good night’s sleep. As for the hammock ropes around the trees, these were easily treated by poisonous saps that kept ants and such at bay.

7. Is the ‘Hammocks on the Moon’ Story an Urban Legend?

Actually, no. It’s true! Hammocks were indeed used on the moon! NASA’s Apollo program provided two in the lunar module for astronauts to rest in between moonwalks. Strange, but when you think of it, so many people had been peering at the Sea of Tranquility from their hammocks in the Pacific, it was perhaps time that someone peered at the Pacific from their hammock in the Sea of Tranquility!

We can only assume that the Tiano never foresaw this for their little beds, but nor could they have foreseen the popularity they would have worldwide.

A hammock’s image may be closely linked with beaches and tropical paradises and the kind of care-free living that we all dream about. They have also become a popular part of lightweight camping gear, with a waterproof tarpaulin added over head. You don’t even need trees anymore, since they now also come with ready stands.

From the beaches of the Caribbean to the moon’s surface, there seems to be nowhere that it can’t be used.

Finding Common Ground: To Tent or Not To Tent
Different Ways To Enjoy A Carrot Dish